A Reely Good Time in Snowmass

From avid anglers to first-time casters, there are fish for everyone in the Rocky Mountains. Snowmass has world-class fly fishing in the nearby rivers, creeks, and lakes. The Roaring Fork Valley hosts a variety of Trout species, including Rainbow, Brown, and Cutthroat Trout. Whether you are tying on nymphs or dries, throw on your waders and head to the water.

The closest fishing to Snowmass is right on the mountain. At the top of the Elk Camp Gondola, tucked in the forest, is the Trout Hook Pond. And as its name suggests, there are some trout to hook just below the surface. But like all local fishing, it is catch and release, so be sure to throw the fish back for the next anglers to come along. 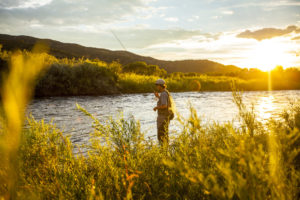 As you head five minutes down the hill from Snowmass, the Roaring Fork River is known for nearly year-round fishing. Just below where Owl Creek joins the river is Jaffee Park in Woody Creek. There is a path on the east bank that winds through the trees offering access to the water for several miles. Conditions vary from deep ponds to shallow riffles and slow bends to faster rapids.

Just a little further downstream from Snowmass is the Frying Pan River, which originates in Ruedi Reservoir and flows through Basalt. From dam to confluence, the Frying Pan River is known for being Gold Medal waters for fishing. What does this mean for you? It makes the Pan, as locals call it, an amazing place to both learn and test your skills if you are more advanced. Each bend of the river offers different types of flows to fish for browns, bows, and brookies. Instead of heading downstream, head for the hills. You will find just as many fish. The high alpine lakes throughout the region are known for housing some monster fish, especially Cutthroats. Snowmass Lake, American Lake, and Lost Man Reservoir are just a few that are worth packing your fly rod for when you head out for a hike, and remember bigger fish means bring some bigger bugs (local fly shops will have the best options for varying locations).

Whether you are looking for closer to home, further afield, or anything in between there are fish to be found in almost all the water near Snowmass. Make sure you have a fishing license, check the fishing report, and you are ready to hit the rivers. But they don’t call it “catching” for a reason, so enjoy your day on the water no matter how many fish you reel in.

Jordan is a photographer and writer, based in Aspen. Being landlocked in Colorado was not an option so she began exploring her backyard by snowboard and SUP, from skinning up Rocky Mountain peaks to surfing river waves. With a work hard play hard mentality, she can be found most often in the outdoors. Year-round adventures abound in the Rockies and beyond mean an endless supply of adventure photos and stories. Jordan never leaves home without a camera, because here in the mountains you never know when the next adventure will begin.

Why Snowmass Is Colorado’s “Put In” for a Rafting Vacation

Intermediate Skiing Guide for All Ages

Whether you've come to Snowmass before or are here for the first time, skiing your way across the mountain is...

Tips and tricks to know as you prepare for your visit Snowmass— the quaint yet vibrant mountain village where you...

In Snowmass, we’re a family destination with kid-friendly activities of all kinds available daily, and special kid-centric events throughout the...

So Your Kid’s a Ripper... Here’s Where to Ski at Snowmass

That surge of joy in a ski bum’s heart that comes when your kid is able to ski or ride...